The Source of New Years Joy

I remember a time in my younger years when New Years was a bit depressing. Oh, I enjoyed football and other things, but there was also fear and apprehension. The friends I had chosen did not know Christ and could not encourage me to approach the New Year with joy and Biblical optimism. In spite of friends, I was lonely and uncertain. Insecurity ruled my life. My rock music heroes offered me no hope, and the light of Biblical faith was dim.

I am grateful for two little words that appear in the Bible: “but God”. Bear with me as I make some grammatical application. “But” is a conjunctive and usually acts as an adversative. In other words, what comes after “but” goes against the grain of what came before. That is what happens with our Lord. Everything that comes after Him runs against the grain, or is the antithesis of what came before. In Ephesians 2, Paul describes what our lives were like when we were dead in trespasses and sins. Then he says; “But God…” “But God shows His love towards us in that while we were yet sinners, Christ died for us.” (Romans 5:8). “But God chose the foolish things of the world to confound the wise.” (1 Corinthians 1:27) This is the life, this is the hope, this is the joy of the one who belongs to Christ: “But God”.

We never know what a new year holds. “A man’s heart devises his way, but the LORD directs his steps.” (Proverbs 16:9) We can only say, “If the Lord wills, we shall live and do this or that.” (James 4:15) The coming year holds the looming potential of frightening possibilities. Radical Islam is on the rise. Radical leadership has attempted to destroy much of what we hold dear. There is a bleakness as evil seems to be successful in its efforts to quench the light of truth. What is worse is that all too few seem to understand the real issues we face. These are dark times.

“But God…” A bleak outlook and a frightening prospect are not new to the people of God. Sennacherib, King of Assyria, brought his great army against the holy city of Jerusalem. When word got out, people were understandably afraid. Preparations were made, but prospects were bleak.

Then Hezekiah king of Judah exhorted the people: “Be strong and courageous, do not be afraid nor dismayed because of the King of Assyria, nor because of the great throng that is with him; With him is an arm of flesh; but with us is the LORD our God to help us, and to fight our battles. And the people rested themselves upon the words of Hezekiah.” (11 Chronicles 32:7,8)

These words are similar to those of the Apostle Paul in Romans 8:31; “What shall we then say to these things? If God be for us, who can stand against us?” This new year is full of the unknown, but the unknown need not control us. We can look to the new year with joyful anticipation, because the source of our joy owns the past, present, and future. “Though Satan should buffet, though trials should come, let this blessed assurance control: that Christ has regarded my helpless estate, and has shed His own blood for my soul.” So as you face the year, rest your life and future on these two words: “But God”. 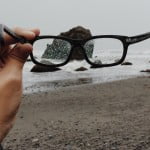 “Open My Eyes That I May See”Blog, Pam Cavanaugh