Here is the third part of the series of real-time reports we have been sharing the last couple weeks from our friends Joel and Loriann who are working in the Ukraine. The testimony of God’s work is powerful.  Be sure to read and continue in prayer.

“If my people who are called by my name will humble themselves, and pray…”

While not much has changed visibly over here in the last couple of days, we wanted to write with an update, as well as tell about a few things we were able to be a part of over the weekend.

First off, the situation in Ukraine is still tense, unstable and on razor’s edge. The Russian (or Russian backed) troops in Crimea have continued to tighten their grip on the Crimean peninsula, while the Russian government has accused Ukraine of falling into lawlessness. Three times international observers have tried to enter Crimea to appraise the situation, only to be forcefully turned away each time by Russian supported troops. There have also been numerous reports of journalists being threatened and even beat up by these same forces there in Crimea. And the noose around Ukrainian military bases in Crimea has continued to tighten as well. While there has yet to be any armed combat or hostile takeovers of these bases (though there have been a few attempts), there is a pattern of psychological intimidation by the Russian supported troops on the Ukrainian military as well as on the pro-Ukrainian people all over Crimea. Things have also turned violent at times in Eastern Ukraine when pro-Ukrainian and pro-Russian demonstrators have collided. And sadly there seems to be an avalanche of false or truth-twisted propaganda coming from much of the Russian government and Russian media. This is especially hard for the Ukrainians around us to take. They still very much view the Russian people as their brothers and sisters. Many Ukrainians have relatives which have come from Russia or who are still living in Russia. In the everyday Ukrainians that we know and that we have contact with, there is no hatred for the Russian people. This is why they cannot understand for what purpose Russian media and government is trying to make the Ukrainian people out to be violent, lawless, fascist and anti-Semitics. This is just not the case. Please pray that God would continue to give a spirit of peace and forgiveness to so many here in Ukraine who have been hurt by these false accusations. 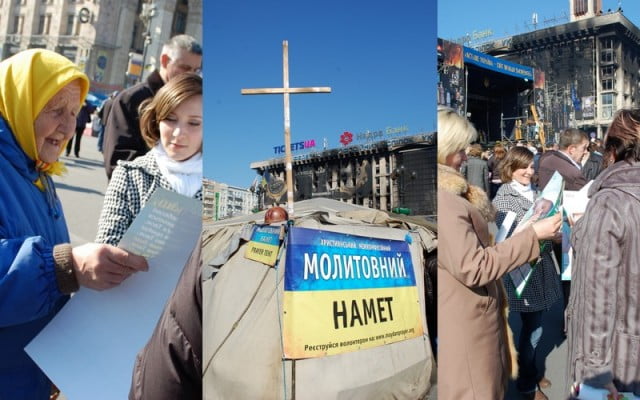 As I wrote in our last update, this past Friday night I had the joy of giving a challenge to almost forty young people at an all-night prayer meeting at our church in Kiev. But before the meeting at the church began, I met with four of the youth as we joined with about twenty other Christians down at Maidan Square for a time of prayer. This was an interesting time as I had yet to be down on the Square at night since the fighting took place there last month. It was almost like walking into a dark military camp with all the tents set up and the people in uniform walking around. Praise the Lord there weren’t any guns! After a bit of confusion as to where everyone was meeting, we finally found out where the prayer time was to be held which was about a block away at a very famous building once used for national exhibits. Once we arrived at the building we were refused entrance by the guards as we waited for clearance from higher-ups. After the new government came into power the middle of Feb. the protesters took over this building as one of their headquarters. This is where we had our first prayer meeting. It was such a neat experience as we prayed and sang songs under the huge dome of this great building surrounded by many of Ukraine’s freedom fighters. One young protester in army fatigues came up to me as we were singing and said that if we stood in the middle of the hall, our songs would sound much better. Some in our group were able to pray with a number of the fighters as well as pass out Gospels and other literature. After about an hour and a half there, our little group of four walked back through the barricades and tents to the metro and returned to the church. While I wasn’t able to stay at the church the entire night (due to Loriann being home with a head cold,) I was able to challenge those who came, to seize the open doors around them and to live their life different than society and for the glory of God. And that God had put each one of us here in Ukraine, at this specific time, for just this purpose.

And just yesterday Loriann and I (praise the Lord for His quick healing!) again went down to Maidan Square. We were told on Sunday that there would be a time of prayer at the Square starting at noon. We really didn’t know what to expect but felt like we should be there to support and help whomever we might meet there. What actually took place totally surprised us. Yesterday was a national holiday here in Ukraine celebrating the birthday of the national poet Taras Shevchenko. So there were many, many people out and about yesterday. Maidan Square was full of people. When we arrived we walked around for a bit until I bumped into an acquaintance. He was there with his church passing out calendars with scripture verses on them as well as other literature. I asked if we could help and he said, “Grab a stack and start handing them out!” Both Loriann and I each grabbed an armful of large, beautiful, one-page calendars that had a Scripture verse or the Lord’s Prayer on them and proceeded to pass them out, or rather just stood there as people mobbed us asking for “one for my sister,” or “another for my invalid mother.” The hunger and the openness of the people reminded me of my early days in Russia when we used to pass out Bibles in villages outside of Moscow. The large calendars were soon gone and so we grabbed smaller, full, 12-month calendars and walked through the soup kitchens handing out calendars that were titled “A Woman After God’s Heart” (for international Woman’s Day). We wanted to give them to the ladies who were giving such long hours to cooking and serving the many protesters. Many took them, surprised that they were free but thankful for our small show of gratitude towards them for their labors. Thousands of these calendars were handed out in probably a half hours time. It was just about this time that we learned that the time of prayer that we were told about was actually going to be much bigger than we had thought. There is a large stage set up in the middle of Maidan Square where many leaders of the protest movement have given speeches. Yesterday this stage was turned into a pulpit. The leaders from each of the largest evangelical Christian denominations came together with each given the responsibility to lead the crowd in prayer for a specific topic i.e. peace and stability, unity in Ukraine, families, humility and repentance and lastly the future of Ukraine. Hopefully in the pictures we are inclosing you can kind of get a sense of the uniqueness of this event. There were literally thousands and thousands of people in the square. From where Loriann and I stood, there was only a sea of faces around us. As each president, bishop or leader from the different denominations came up and first gave the gospel message and then prayed, the crowd as one became united in prayer. Many people were in tears, openly weeping as they asked God for peace for Ukraine. Never have Loriann or I been in such a public time of prayer. You could feel the Spirit of God come and cover that square, the same square where just three weeks ago almost 100 people were killed in horrible acts of violence. Thousand and thousands of Ukrainians were crying out to God to heal their land and give them peace. The last leader to pray was the President of the Baptist Union. As he closed his opening remarks, he asked the other leaders to join him in kneeling before Almighty God and in humility ask Him to bless the future of Ukraine. As the prayer began, there was a ripple affect as many in the crowd joined the pastors in kneeling in prayer. Imagine, thousands of people kneeling in prayer in the middle of the capital of one of the largest countries in Europe! It was truly an amazing sight. The verse that kept coming to my mind as all this was happening around us were the words God spoke to Solomon “If My people who are called by My name will humble themselves, and pray and seek My face, and turn from their wicked ways, then I will hear from heaven, and will forgive their sin and heal their land.” 2 Chron. 7:14 I believe that what Loriann and I took part in yesterday afternoon was just the beginning of something amazing here in Ukraine. The church here is coming alive and the need to pray has never been so strongly felt. What an honor it is for us to be in the midst of these historic days. 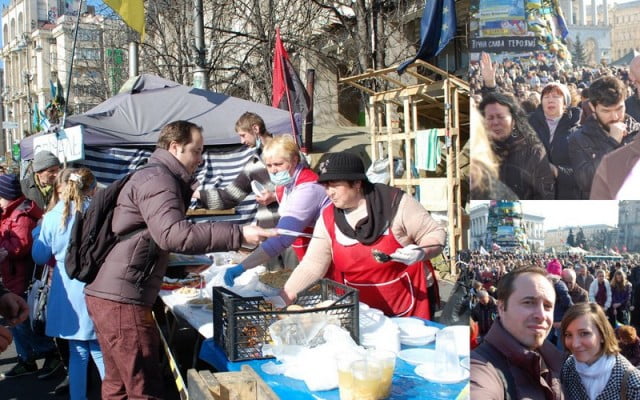 Again we thank each one who has written with a note of encouragement or an assurance of pray. You continue to bless Loriann and I greatly! Sorry again that we haven’t been able to answer each one personally. Please know however that every one of your notes is read, reread and treasured. Thank you also to each one who has given to the work over here. We are overwhelmed by your generosity and kindness. Oh and for those who have asked, the ATMs have started working again though we are greatly limited in how much we can withdraw each day. This means we have to make multiple withdraws (which means additional bank fees), but those are a small thing as we are very grateful that our finances haven’t been cut off entirely. God really does take such awesome care of us!

Thank you again for your prayers… Please don’t stop!

With much love and many prayers,