There is such a shortage of it. It is not impossible to find, but it gets crowded out by the bad news. The big three, “sin, sorrow, and death”, seem to be having their way. They own the news. Meanwhile, righteousness is diminished, and wickedness abounds. It is somewhat frightening.

The anti-God forces are having their way. It is seen in radical Islam killing many and terrifying many others.  It is seen in the advance of secularism in the United States; a militant secularism that will not be satisfied until it silences every voice and every remnant of Theo-centric, Christo-centric, and Biblio-centric truth. We see it in a church that still pins its hopes on a national leader who will turn the tide in another direction: a church far happier with its comforts and conveniences than with Christ and Christ alone.  It seems as though we spend our days waiting for the next big tragedy and wondering if anything can stop the forces of darkness. As Christians, we can hardly help wondering if our day is one that will witness an onslaught of persecutions that western Christianity has not yet seen. If we are not careful, we could be caught up in the uncertainty and dread that grips the world. We could succumb, at least subconsciously, to such fear.

But what is actually happening around us? Are things as they appear? The answer is yes and no. Yes, the world is rife with evil. In the United States, the days of cultural Christianity are gone with hardly noticeable remnants here and there. Judeo-Christian values and a Puritan ethic that once dominated the cultural landscape have all but disappeared and are fodder for jokes and cynicism even in some Christian circles. The leaders of our nation pay lip service to Christianity, while denying and undermining every vestige of Christian and Biblical orthodoxy.Sin and perversion are applauded while righteousness is hated. The nations rage, and the people imagine a vain thing.  But Psalm 2 does not make that as a statement. It poses it as a question. “Why do the nations rage, and the people plot a vain thing?” The question is as appropriate today as it was in the day of the Psalmist. Why indeed do the rulers of the world set themselves? Why indeed do they take counsel together against the LORD and against His Christ? For what appears to be the triumph of evil men, is but a prelude to their ultimate fall. “He Who sits in the heavens laughs. He scoffs at them.”  The world may be falling apart around us, but our Lord is having His way. “He does whatever He pleases.” Fret not because of evil doers,… They shall soon be cut off and wither as the grass. Be still before the LORD, and wait patiently for Him; … Refrain from anger, and forsake wrath! Fret not yourself; it tends only to evil.” Shall we fret and not trust our mighty God? Shall we fear that His Gospel will not prevail? “If God is for us, who can be against us?” For those who know Christ, the good news of the Gospel overshadows all the bad news, and it is that good news that we gladly bear as a light to the nations. 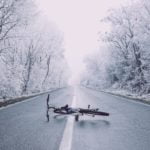