Nor is it the unanswered and unanswerable questions that are necessarily the most troubling. It is often, perhaps more often, the questions with answers that stay with us, demanding our attention. Maybe that is why humans often are happier with unanswered questions; questions of life, death, and eternity.

Recent circumstances in the providence of God have turned my thoughts more in this direction. I recently received a text from my cousin informing me that his mother had died. In the same week, a vibrant Christian sister about my age died after a struggle with terminal illness. Even more recently I found out that my Father has been diagnosed with stage four melanoma. All of these have reminded me of the rhetorical question asked by James in his inspired letter to struggling Christians: “What is your life…?” To which he replies; “It is but a vapor, appearing for a little time, then vanishing.”

I will soon turn sixty-three. Even if I live a relatively long life, most of it is gone. Which leads me back to the question James proposes. It is more than a reminder of the certainty of death, although it is that. It is a soul-searching question about the meaning of life, especially for the child of God. It is as much a question of why and where as it is what. It is a question of purpose, direction, and destiny. How then can we profit from pondering James’ question and applying its answers?

I urge you to do three things:

First: Embrace the Uncertainty of Life.

Both the surrounding circumstances and the personal conditions of life are uncertain. It is certainly foolish to approach life without plans. But it is just as foolish, perhaps more so, to make plans without God. Everything is predicated upon the active providence of our Lord. Circumstances change, sometimes rapidly and sometimes drastically. This is not abnormal. This is Providential! In like manner, personal conditions of physical, mental, and emotional health as well as financial status can all change, as a quick look at the opening chapters of the book of Job reminds us. If you and I do not embrace this reality, we could become disappointed, frustrated, angry, and even bitter.

Second: Embrace the Brevity of Life.

In August of 1963, my mother began to have labor pains. My Father rushed my sisters and me to our relatives and my mother to the hospital. Soon we were told of the birth of a boy. I had a brother, and, being the only boy, I was naturally excited. But it was only in the next day or two that young Daniel began to have problems and died. My hopes of a brother to share life with were dashed and my nine year old heart was broken. For me, that was an early lesson on the brevity of life. Life’s duration is short, even at its longest. This life’s termination is sure.

Third: Embrace the Priority of Life.

Woven into the text of this exhortation by James is his inspired answer to his question: “What is your life?” We face all the uncertainty of this brief life with one priority: the will of God. Life is not something to be tenaciously held to. Rather it is a valuable gift to be invested. The believer does not spend his or her life nor does he waste it. He invests it. “If the Lord wills….” is not a cliche. It is a way of life. The will of God is not a hard to find lost treasure. It is the path of a disciple. We invest our lives seeking God’s will in the only place God reveals it: in His Word. God’s will is also something that He unfolds in His own good time, as He leads by His Spirit, for “…. as many as are led by the Spirit of God, these are the sons of God.” “A man’s heart devises his way, but the LORD directs his steps”(Prov.16:9). He must be the Lord of our plans. Then we invest our life in doing God’s will. We must be doers of the Word and not hearers only. God has revealed His will. It is ours, by His grace, to obey.” “What is your life…?” Its direction, its purpose, its destiny are all in His hands. “Only one life, ’twill soon be past. Only what’s done for Christ will last.” To this end we labor, that, whether present or absent, we may be pleasing to Him”(2Cor. 5:9). 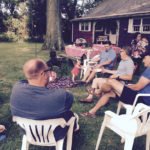